The below process is new for 2023, as will be implemented by Football Australia, Football Queensland and Nerang Soccer Club. As this is a new system it may be subject to change and we will do our best to advise, guide and inform people throughout the process. Note: The previous third step on the ‘Squadi’ platform has been removed and is no longer required.
LINKS and INFORMATION will be emailed out and published on January 9th

Register Fee Payment for each player you are registering

This new platform streamlines the fees process for Nerang Soccer Club and will provide several options including payment in full, payment plans and options for those using QLD Government sport vouchers.

Please make a note of the age groups listed below and be sure to choose the correct registration fee bracket for each player. Any player registered in the incorrect fee bracket will still be required to ensure their fees are paid in full prior to participating in the 2023 season games or training.

This process must be completed first and all players must be financially registered with Sign On Day prior to commencing the 2023 season at Nerang.

IMPORTANT: Click on ‘continue shopping’ after registering each player if you wish to combine multiple players (for example; siblings etc) into the one transaction and payment plan.

Register at Football Australia for each player you are registering

Ensure you have successfully completed Step One for all players you are registering.

Now complete the registration on the Play Football portal (same as usual) with Football Australia for each player.

Select Nerang Soccer Club and complete your registration for your corresponding age level.

This is the same system for Football Australia (FFA) registrations as in previous years, with the exception that after you have registered and made payment at Sign On Day, you will not be asked for any payment through the Play Football system.

Repeat the process for each player if you are registering multiple players.

Once both registrations are completed for each player, please see return to training dates below, and turn up at the club for training and team selections.

In some circumstances, some girls players are permitted to play down one year in age if required, at the club’s direction. A small amount of players may be accepted to play up one year in age, provided they meet the new Football Queensland eligibility criteria, are suitable — this is at the discretion of the club and based on an individual case by case basis.

As always, Nerang Soccer Club provides one of the most affordable and all-inclusive football fees structures in Queensland.

All junior players get included with their fees —

What players need to cover —

Additional provisions (which may incur additional cost or fees) may include —

Whilst we have always ensured that fees and fee increases remain at an absolute minimum, the recent inflation and cost of operation increases have seen a small increase in fees for 2023 — the first such increase in several years. This is critical for the successful and sustainable operation of the club.

Fees can be paid in full up front, or you can enter into a payment plan or even use Queensland Government ‘Fair Play’ vouchers for eligible participants. This is all done during the Step One of the process on the Sign On Day portal.

Senior players please liaise with your coach/manager regarding your fees, training times and structures.

UPDATE: We are confirmed as a registered provider for FairPlay vouchers. We are told the list of eligible providers is currently NOT displaying but will be updated ahead of the opening of the next round of FairPlay vouchers which is on January 25th.

STEP 1 – Head to the FairPlay pages on the Government’s website and register/apply for your voucher in this round of vouchers. Note that there will be high demand for these so be sure to be on it as soon as it opens on the 25th – details and various links to register and apply at https://www.qld.gov.au/recreation/sports/funding/fairplay AND https://www.qld.gov.au/recreation/sports/funding/fairplay/apply

STEP 2 – Head to the FFA PlayFootball portal and register your player/s for Nerang Soccer Club through the normal process – https://registration.playfootball.com.au/common/pages/reg/WelcomeRegPlus.aspx?entityid=30974

STEP 3 – When you have your voucher approved, head to the Sign On Day portal and register your player/s and enter a payment (payment plan, card payment, PayPal, direct transfer etc etc). AT THE CHECKOUT enter your Fairplay Voucher details for your player/s and apply your FairPlay Rebate Discount – https://www.signonday.com.au/listing/nerang-soccer-club

Email registrations@nerangsoccer.com if you have any issues or need assistance, or attend our in-person sign on day at the club this Saturday 21st Jan, 9am to 1pm, for assistance.

If you prefer to come into the club and sign on at the clubhouse, or need assistance with signing on or need to pay cash, please attend our in-person sign on day. Please make sure you have all the necessary information and items with you such as —

Players are encouraged to arrive 5 to 10 minutes before their team’s start time, to be properly dressed and ready to train on time. Field allocation for training will be allocated after registration, player numbers and teams are processed and determined.

IMPORTANT >>> Parents and caregivers are NOT permitted in the training spaces at any time (unless called in by officials or coaches to assist with a player) Please stay outside the fences at all times for any training on fields 1 and 2 and please stay well back and clear of training spaces for all other fields.

Parental presence and support is valued and important, especially in the Miniroos ages, however please give the players space and assist us in creating a learning environment free from pressure, distraction and prompting.

Exceptions may be made during the handover period for the first few sessions for new players in our U6 and U7 teams, please follow all coach and official directions at all times.

Passive grading will commence immediately for all teams U8 to U18. The purpose of and importance of grading is to provide every player a chance to strive, enjoy and develop in the right environment during their football season. Ages with multiple teams may see players graded into different teams and division. Ages with single teams may see grading assist in determining which division of competition to nominate into.

Nerang Soccer Club aims to place players in to teams based on the player’s best interests in the game, ie: where they are likely to be fairly challenged according to their abilities, experience, physical attributes, mindset, maturity and compatibility – and where they can play and train along like-skilled players. The player’s best football interests will always be a priority in how players are assessed — we are here to try our best to make sure players love and enjoy playing the game, stay in the game, get better at the game and find their potential.

Undertaking this process in the limited time afforded to the club is not an easy task but something that must be done in the best interest of the teams and players at Nerang.

Personal circumstances will be dealt with on a case by case basis.

Grading will be undertaken by qualified and/or experienced club coaches and staff including but not limited to the technical director, coordinators and senior coaching staff.

Team nominations for competition teams (U13 and up) are due 10th of February.

We advise all players, especially in the U13 and up age brackets, to be at every session possible in the first few weeks of training.

After grading and team selections have been finalised, there will be some opportunity for movement between teams but this will be ONLY on a case by case basis and at the club’s discretion depending on individual and team circumstances. We aim to create whole teams which remain unchanged or as close to unchanged for the duration of the season.

Players who demonstrate the required physicality and ability during the year may get opportunities to occasionally train up an age group or in a more advanced team from time to time.

First games for each junior age group will be on the weekend of Friday 17th and Saturday 18th March.

Senior Premier League is typically Saturday or Sundays (Round 1 starts 3rd and 4th of March).

Detailed Calendar from FQ below — 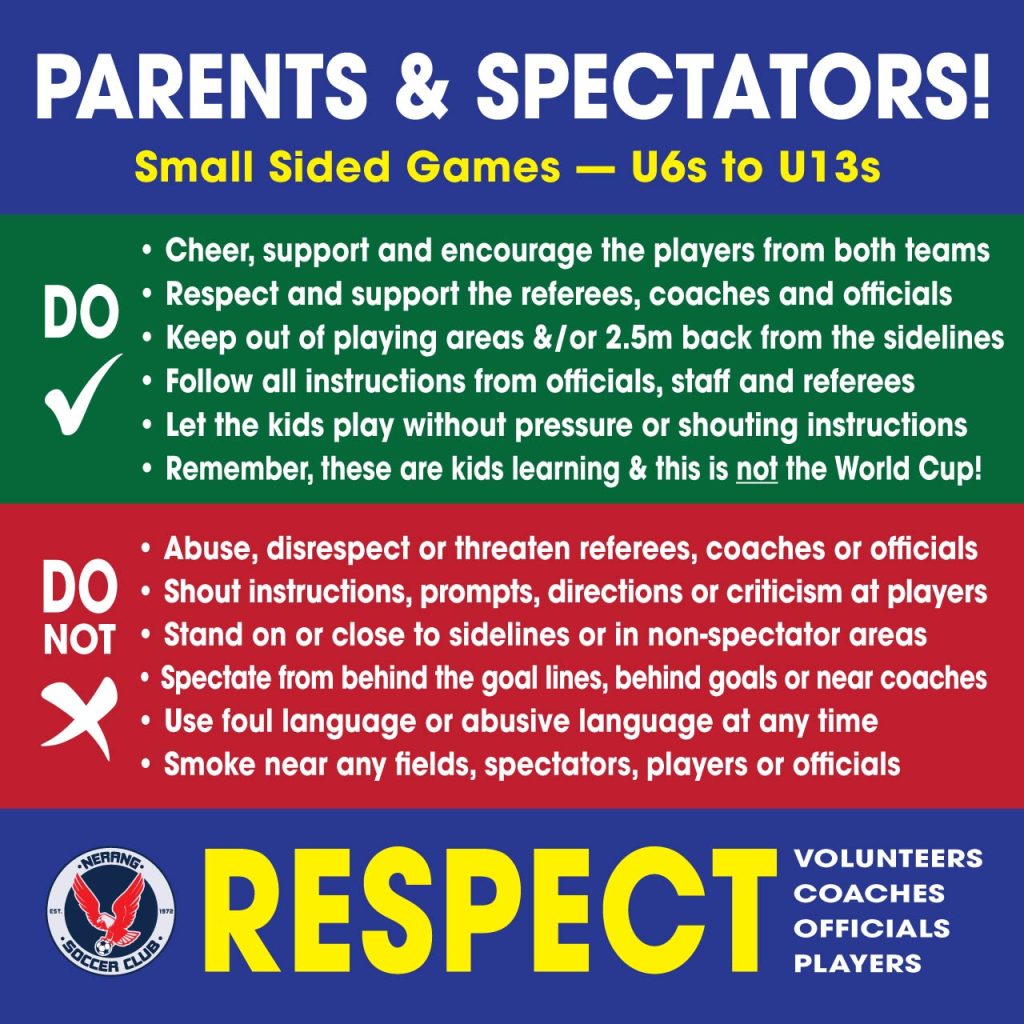 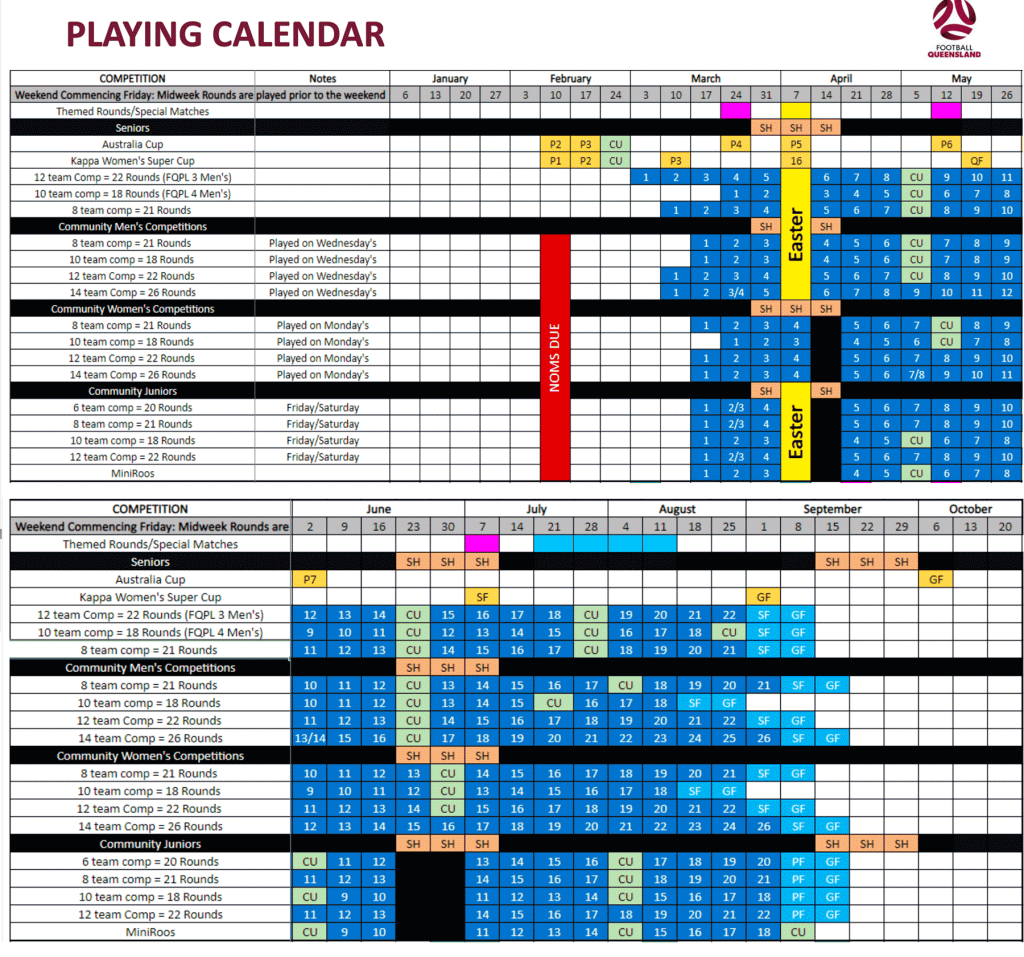 Please see our contact page on this website for details about how to get in touch for assistance or more information.

Please note that whilst every effort has been made to ensure accuracy, information such as dates, times, fees and processes listed above are subject to change. Please be patient as we work through the new registration system this year and new junior structural changes as we are sure there’ll be some teething problems.

Come into the club and see us on a training night Tue or Thursday (from 31 Jan onwards) if you need assistance.