Kitching takes the position after Dominque Dorbeaux sensationally stepped down following a devastating 15 nil loss to Kingscliff — one of the biggest losses in the club’s 50-year history of senior men’s football — which also saw a handful of players depart mid season.

In what will be a poignant moment on the timeline of South East Queensland football, Kitching becomes the first female coach for a men’s squad in the history of the Gold Coast’s top flight of men’s football, however she’s already brushed aside any preconceptions by making it clear she’s not here to make history but for the challenge of building better footballers and teams.

“It’s exactly that [challenge] — you’ve got young blokes who are all willing to learn, not leaving the club or putting up a fight each week but still turning up … so the word ‘development’ is a key thing for me,” Belinda Kitching said after the announcement of her new coaching role.

“I’m a big believer in, and all of my strengths as a coach are in developing [better] players.” 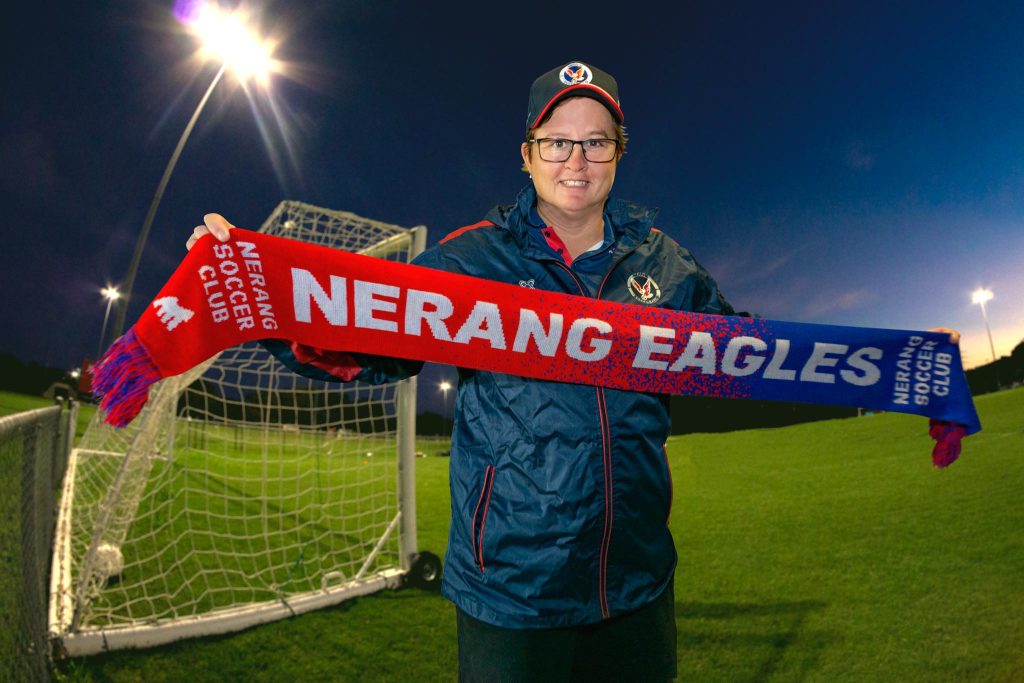 Whilst it’s not her first time taking on a coaching position in men’s football, Kitching admits that it’s a very different dynamic stepping from women’s football into men’s, but says she’s excited for the opportunity to dive into the QPL3 competition.

“One hundred percent, I would not come in [to Premier League men’s football] expecting not to learn, you’ve got to evolve as a coach and you’ve got to be adaptable, the same as players, so I’m looking forward to that experience.”

At an opening address to players and club staff on Tuesday night, Kitching delved into her own experiences in the game both as a player and as a coach, expressing how she believes family is at the forefront of successful club football.

Her strong family connections to the game can’t be denied and as part of the Ipswich Knights (Coalstars) foundations the Kitching name resonates with football success and history in Queensland.

Kitching’s grandfather George played one game for the Socceroos in 1938 and her father was also a prominent Ipswich player and Queensland representative player.

Whilst initially making a start at Nerang in a mid-season rescue, she says she is open to the prospect of staying on at Nerang to continue to build a stronger foundation in 2023.

“I hope so …. if the caretaker role is what [the club] sees me as then that’s ok, but if it becomes a longer term gig, I’m happy to continue on.

“These boys obviously need a bit of consistency, and just somebody here more long-term, and I’m hoping that I’m the person who can provide that for them.”

In her first session Kitching wasted no time in putting the young Eagles’ players under the spotlight by outlaying her structured plan of attack and quizzing players on their understanding of game and training concepts.

“I’m going to absorb them, going to fill them with [football] knowledge and it’s like anything in life, if you’re in your comfort zone then you’re not working hard enough.”

Belinda Kitching wasted no time getting down to business, briefing the club and players of her structure and expectations as a coach.

Kitching’s records of success as a coach and player are impressive, featuring stints as an NPL Women’s head coach, her time with the Matildas including two games in the FIFA Women’s World Cup and receiving her Football Australia B-License as a coach.

Nerang Soccer club President Fred Stone admitted he retained some nervousness in making such a strong directional shift for its Premier League team mid-season, but was adamant that such change is what’s needed to put the Eagles’ train back on its tracks.

After reviewing a total of seven applicants for the job including several high-profile Queensland coaches, the club went with Kitching.

“We had some very good applicants for the role, we narrowed them down and in the end we went with someone we thought would know the club better, who would understand the players and who has a lot of experience as a player and as a coach,” said Stone.

“We want to give her more than just this year — we’re not basing our assessment on this year’s performance, we want to improve and develop the boys further so that next season we can have a competitive team again no matter where we end up.

“I’ve actually coached against Belinda before, many many years ago, and I know she was very good then, and I believe all good coaches can adapt to their surrounds, whether they’re coaching men or women.

“We want to develop young people, young players around some good experienced players and coaches and certainly not this year or next year, but hopefully thereafter, return to start pushing for those top four positions again.”